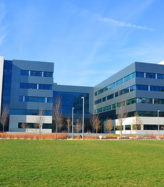 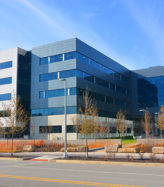 This project consists of the completion of a portion of the fourth floor of the Fifth Third Faculty Office Building. This portion of the floor was not completed during the initial construction of the building, except for the exit stairs, elevators, exit stairways, and minimal fire and life safety signage, lighting, and sprinkler heads. The wide open space was designed to provide 108 6’x6’ open office workstations, eight private offices, six small team rooms, two workstation areas, two community center spaces, and three large team rooms. The three large team rooms are separated from each other with operable partition walls that can be opened to combine two or three of the rooms for use with larger groups, if needed. The floor, wall, and ceiling finishes currently used on other floors of the building were replicated on this floor in similar patterns to keep a consistent theme with the other areas of the building.